Gold's incredible run has been a bit too far too fast for most investors.

That’s a big gain in any market. And from what recent history has taught most investors, that’s too far, too fast.

But gold investors shouldn’t be too concerned about the short-term swings of the volatile gold market...

They should be focused on what’s really going on in the financial world — and how it will propel gold to currently unthinkable levels.

What Obama Can't Do, These SIX Events Could

I urge you, watch this eye-opening video presentation and find out WHICH six "jackpot" events are about to change your life...

And could even make you richer, healthier and happier... in ways no sycophantic bureaucrat ever could!

Click here and find about the SIX EVENTS about to change your life forever.

How Low Can You Go

First off, the current gold correction is nothing to be worried about.

Sure, the “gold is a bubble” crowd has been reinvigorated. The past weeks' mainstream financial headlines have been dominated by phrases like “gold bubble bursting” and “safe havens getting risky.”

The headlines, however, typically move with whatever happened that day in the markets. Up day, recovery is strong. Down day, depression is right around the corner.

Listening to them is like trying to drive a car forward while only looking in the rearview mirror.

There are, however, reliable sources you can use to guide yourself safely and profitably past the daily ups and downs. One of these is history.

And once gold’s current run is put in a historical perspective, its next move becomes a whole lot clearer.

Stay In the Boundaries

For example, when compared to the last gold bull market, the past year’s 54% peak-to-trough run in gold is well within bull market territory.

The table below shows the changes in average annual gold prices throughout the last major gold bull market. 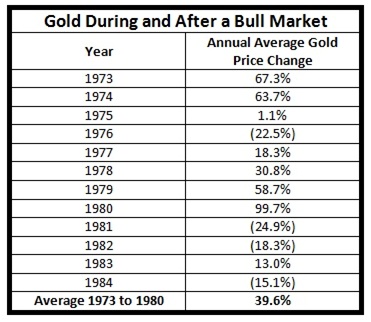 As you can see, the current run-up is neither too far nor too fast.

In fact, half the times prices rose by at least 50% in a year, gold did even better the next year. The rest of the time, gold prices fell or held steady in the next year.

As a result, we can conclude the big run-up may have been a bit too far in the short term. But over the long run, the current 54% move is still well within historical norms for a bull market in gold.

Keep in mind this is a correction.

That means the bull run in gold is not likely to turn significantly to the green anytime soon.

Were you aware that, at this very moment, a secret investment exists that pays you twice the gains gold makes?

With prices expected to surge as high as $5,000 per ounce, I'll show you how to leverage those gains and collect twice the gains other "gold investors" are pocketing...

Sooner Rather than Later

The turnaround may be a while... but history shows it won’t last long.

This table shows the essentials on all previous corrections in the gold bull market:

Simply put, (with the credit crisis as the lone exception) none of the gold corrections were very deep, nor did they last a long time. Even when the 2008 anomaly is incorporated, the average correction took four months to hit bottom...

In short, the average correction has lasted only a few months.

And the window of opportunity to buy the dip can — and will — go by quickly.

Gold will inevitably continue its ups and downs. As gold prices head higher, the short-term swings will seem larger.

The current $150+ correction feels a lot bigger than it is. The decline has only been about 10%. But since it appears to have fallen fast and hard, the herd will expect it to continue to fall.

Only time will tell if they are right in the short term. But in the medium to long term, the outlook for gold is as strong as it ever was.

Remember, there are only a few assets that perform consistently well in today's current financial and economic environment...

Gold is one of them.

Gold is falling out of favor now. Don’t let this time pass you buy.

How to Profit from Chinese Oil Addiction

With 1.3 billion people to feed and transport, China's oil hunger is insatiable.

That's why the Chinese are eyeing their own shale natural gas deposits to replace oil. And they're going to need American expertise to get it.

This company's "petrofracking" technology may just be the ticket for powering China well into the next decade — and its success could be the next cash cow in your portfolio.

A tsunami alert was issued right away for the Fukushima region, a place that needs no introduction these days.

But for the most part, folks paid little mind. After all, these types of things have become quite common.

Although there's no denying that after the Fukushima nuclear disaster, the nation's opinion of nuclear has changed quite dramatically...

The problem is before the Fukushima disaster, nuclear power accounted for about 31 percent of the country's electricity needs. That's a pretty big gap to fill for a nation with minimal natural gas reserves and a demand for coal that is primarily met by Australian exporters.

So it's no surprise the Japanese government has been toying around with the idea of subsidizing solar and wind as a way to fill some of that gap.

Japan's Going to Make Us Rich!

Behind the backdrop of that 6.8 magnitude earthquake, Japan's lower house of parliament gathered on August 19th to pass new legislation that will now heavily subsidize solar.

And when I say heavily, I mean heavily...

For solar, rates will likely command a 45 percent premium over current grid prices. And these rates are expected to last a full 15 years.

The question is: How can this information help you make money?

Sparking a Rush on Solar Stocks

In 2000, Germany restructured its own very generous feed-in tariff for solar.

From 2000 to 2010, Germany's installed solar photovoltaic capacity experienced a staggering CAGR of 66 percent and basically took the solar industry from niche player to a billion-dollar behemoth that now boasts global revenues in excess of $100 billion.

Germany's feed-in tariff was so significant that not only did it enable the country to get nearly 20 percent of its power from renewables (rising to 35% by 2020 and 80% by 2050), but it also sparked a rush on solar stocks.

From solar module producers to cell manufacturers, the solar industry continues to benefit from massive growth. And it all started with Germany's feed-in tariff.

But here's the thing: Germany was never in the same vulnerable position as Japan is today. Germany wasn't crushed by a giant tsunami that ultimately led to the melting down of some of its nuclear power plants.

40 Winning Picks in a Row... Now We're Letting You Have the Next Four — FREE

That's the insane win streak that Pure Asset Trader recently went on in 2011.

Now we're giving you the opportunity to try out four trades from the industry's hottest trading service, absolutely FREE.

Japan's energy crisis is unlike anything we've ever seen, and the Japanese government is faced with two very uncomfortable realities:

This is why Japan is about to pony up big-time to get as much solar integrated as fast as possible.

And this is why solar investors are now lining up at the door to get a piece of this action.

How to Play Japan's Solar Transition

Chinese solar players like JA Solar (NASDAQ: JASO) and Suntech Power (NYSE: STP) will also get some of this action.

But for the big money, we're not necessarily interested in just the “immediate” beneficiaries. No, we're looking at the disruptive players, too.

We're interested in the companies that are going to swoop in with new pricing structures and new technologies that will enable Japan to get this done — but at a much cheaper cost than what Germany had to pony up twenty years ago.

From low-cost cell manufacturing out of China to technological breakthroughs like solar plastics and solar windows, Japan is going to embrace any solid technology that will enable large-scale integration without taking on any more large-scale debt.

This is actually one of the reasons we're playing one of the only publicly-traded solar window companies right now — in anticipation of this major transition. You can read more about that company here.

And let's face it, what better time to stake your claim to a disruptive solar technology company than right now — just days before Japan's new feed-in tariff is expected to become law?

That's right, my friends. By Friday, September 2nd, Japan will officially light the fuse to the next solar bull market when the upper house approves the solar subsidies.

And if you want to lock in some serious gains on this one, you need to be in now.

There are a handful of solar stocks that are going to soar once this feed-in tariff kicks in. But I'm convinced one of the biggest winners will end up being this little solar window stock.

To a new way of life, and a new generation of wealth...

Refer a Friend to Wealth Daily

Is Gold Tapped Out?

Yukon to Deliver the Gold This Summer

Why Are Gold Stocks Underperforming Gold?

Economic Releases for the week of Monday, August 29th, 2011:

You May Also Enjoy...